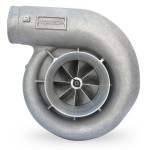 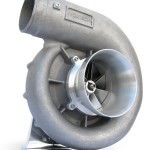 Even more serious, the V-28 123 supercharger is designed to provide up to 45 PSI in extreme drag racing applications. Recommended to racers who are building for 6-second ET’s in Super Street and Outlaw racing classes.

Its peak efficiency of 83% surpasses all other competing superchargers, allowing for higher boost at cooler discharge temperatures.

Other, less efficient superchargers may be able to provide equal or greater levels of boost, but do so at higher discharge temperatures and with greater parasitic power loss.

Racers who switch from a competing supercharger to the 123 will be capable of lower ET’s and faster top speeds due to its higher efficiency, lower discharge temperatures, and greater power potential.

With Vortech, you won’t need a truck full of spare superchargers to follow you around the country in order to compete. The extreme durability of the V-28 supercharger design allows a single head unit to be used for multiple quarter-mile passes before being replaced, under the same conditions that cause competing superchargers to wear down and need replacement after one or two passes.

The V-28 123 supercharger is recommended for the following race classes: